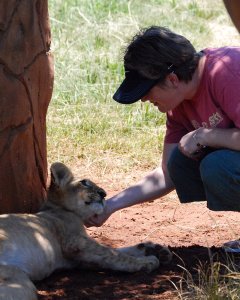 One of the fun things we got to do while we were in Africa was visit a Rhino/Lion park. It was basically an animal reserve area where the non-carnivorous animals were allowed to wander the open space, and the carnivorous ones were enclosed in drive through areas. We got some great pictures of ostrich, zebra, warthogs and springbok. We also got really close to some of the big teethed kinds! The cheetahs were laying right next to a fence and we drove right up beside them. They were on the other side of the car from me so I kind of perched on the window and took a picture over the top of the car. The driver of our car said that if the cheetah decided to make lunch of us it wouldn’t matter whether I was up there or not. The windows were down on the car! Two lions walked so close to the car that I could have reached out to touch them if I wanted to. They were amazing. We drove up on one and Cheryl was sitting in the front where our drivers side would be, with the window all the way down. We were so close to the lion she started to slowly roll her window up. The driver stopped her from doing it because she was interfering with the view, so she slowly rolled it back down:) As you see in the pictures one thing I got to do that I would never get to do here in the states was go into a cage with baby lions and pet them. The first picture shows me petting one under the chin, the second shows me after he tried to bite me when he got tired of the scratching. I didn’t put my fingers back in reach of his mouth again. The last picture shows the cub I moved to afterward. She appreciated my attention!! 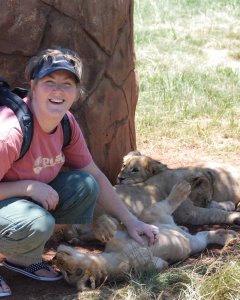