So after much drama, here are the pictures of the inside of the new house. Okay, so not much drama, just procrastination 🙂 There is much to be done to give it the look that I would like. But don’t get me wrong, there is nothing wrong with the house as it stands. Its mostly an issue of taste, what I would like in terms of colors and finishes etc.

The chalkboard on the right wall was originally at K-State. When they remodeled the classrooms the former owner got one that they were discarding. Apparently it is attached to the wall so that even Popeye can’t get it off. It weighs over 400 lbs. Good thing is that we are planning to remove that wall. It divides the kitchen area and the family room. 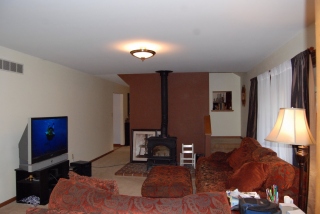 This is the family room. The front door is at the front right of this picture. I don’t like the way we have it arranged but I don’t know how else to do it. That darned wood burning stove is in the most awkward place possible. The wall behind the T.V. is the one I would like to remove. 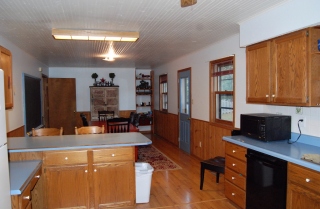 Like my Rubbermaid blue counter tops? I bought counter top paint, I just haven’t gotten it done yet. I’m thinking about painting the cabinets red. Or red on top and black on the bottom.

Study. Imagine the baby grand where the china cabinet is. It is still in storage.

Master Bedroom(ish) There are two bedrooms on the first floor, but no master bath associated with either one. So we gave Caleb the one next to the bathroom so he gets the noise 🙂 and we took the slightly smaller one. Eventually we will combine the two and make a master suite.

Look how clean it is. “Sigh” It never lasts long. But I promise it will be clean if you will to come see us!!

1 thought on “Inside Pictures”